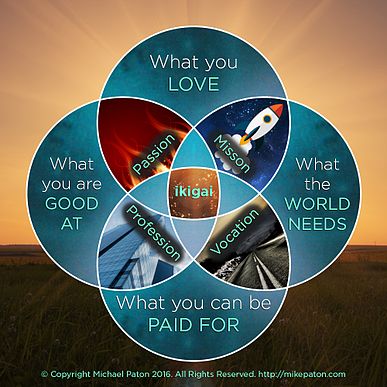 Ikigai – is a Japanese concept meaning “a reason for being”. Everyone, according to the Japanese, has an ikigai. Finding it requires a deep and often lengthy search of self. Such a search is regarded as being very important, since it is believed that discovery of one’s ikigai brings satisfaction and meaning to life.*

“You will get no comradeship and no encouragement…You will have to get used to living without results and without hope…There is no possibility that any perceptible change will happen within our own lifetime. We are the dead. Our only true life is in the future. We shall take part in it as handfuls of dust and splinters of bone. But how far away that future may be, there is no knowing. It might be a thousand years. At present nothing is possible except to extend the area of sanity little by little. We cannot act collectively. We can only spread our knowledge outwards from individual to individual, generation after generation…there is no other way.”

After the first reading the passage above, from George Orwell’s 1984, sounds dark, gloomy. Even somewhat nihilistic. But only at first first. Rereading it again I could not help but feel validated in the face of expended efforts done in pursuit of a certain aim or a goal. Validation is conveyed not through the optimistic words that reassure that what one is doing is right, just, and noble.

No. It is through the emergence of a feeling that the work that one is doing is a part of a bigger whole. Of seeing the big picture and seeing how you fit in into it. Coming to peace with the fact that the change that you are working towards will not come into effect in your lifetime. But persevering, nevertheless.

“Our practical projects have run into confusion again and again through failure to see that individual people, nations, animals, insects, and plants do not exist in or by themselves. This is not to say only that things exist in relation to one another, but that what we call “things” are no more than glimpses of a unified process. Certainly, this process has distinct features which catch our attention, but we must remember that distinction is not separation. Sharp and clear as the crest of the wave may be, it necessarily “goes with” the smooth and less featured curve of the trough.”

There are things that we call differences with which we are able to differentiate one another, but we are too close to the subject at hand in order to perceive it objectively and to see it with certain clarity. Perspective. We lack the perspective when considering our place on this earth, and especially in this universe, as being separate from one another, and separate from our environment. This we are not.

Consider the example above, taken from The Book: On the Taboo Against Knowing Who You Are by Alan Watts, people and the groups in which we place ourselves in order to differentiate can be considered an ocean. Each group of people can be construed as a wave, but we do not see all of humanity as a totality that is am ocean, much less a wave. No we do not. We see ourselves as individual drops of water. We lack perspective of how we fit together in order to form a magnificent force that is an ocean. We are unable realize the comparison in seeing our efforts in groups akin to the waves hitting the beach. Only imagine if we realize our potential to act as one. The force of waves, the force that is the whole ocean. What a glorious feeling that is.