Thou hast made me endless, such is thy pleasure. This frail vessel thou emptiest again and again, and fillest it ever with fresh life.

This little flute of a reed thou hast carried over hills and dales, and hast breathed through it melodies eternally new.

At the immortal touch of thy hands my little heart loses its limits in joy and gives birth to utterance ineffable.

Thy infinite gifts come to me only on these very small hands of mine. Ages pass, and still thou pourest, and still there is room to fill. 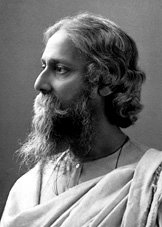 The exact date escapes me, but I remember that my studies of Buddhism started around the summer of 2012. Stoicism came into my life a few years later in a form of Marcus Aurelius’ Meditations. Currently reading Epictetus’ Discourses I come upon a point after point where similarities between the two philosophies are striking.

Buddhism, personally, feels more like a philosophy, rather than religion.

An important line of thinking that is shared by the two philosophies of Buddhism and Stoicism concerns our craving and want of things. Those wants are not limited to material possessions that we can acquire in exchange for money. Included is the achievement of certain benchmarks that we often treat as physical things that are to be achieved in life: a ‘good job’, high social status and the rest…if these “needs” could be met then most certainly we have achieved happiness. Right?

Let’s see what Epictetus has to say:

“​If you must be affected by other people’s misfortunes, show them pity instead of contempt. Drop this readiness to hate and take offence. Who are you to use those common curses, like ‘We get angry because we put too high a premium on things that [people] can steal. Don’t attach such value to your clothes, and you won’t get angry with the thief who takes them. Don’t make your wife’s external beauty her chief attraction, and you won’t be angry with the adulterer. Realize that the thief and the adulterer cannot touch what’s yours, only what is common property everywhere and not under your control. If you make light of those things and ignore them, who is left to be angry with? As long as you honour material things, direct your anger at yourself rather than the thief or adulterer.“*

Have you seen a teenager wear a new pair of white sneakers, only to become enrage when someone accidentally steps on them? The addition of about a dozen years since I had graduated from high school graduation had given me a new perspective on purchasing sneakers. With age came a great many things to preoccupy my mind other than the cleanliness of my footwear: making the most out of being a husband and a dad, squeezing in more time for reading, work/job/career (can’t figure out which one is more appropriate). Most challenging part of life is not taking this said life too seriously.

It could be just that I live in New York City… lack of smiling faces, impatient drivers honking, dirt and garbage everywhere…but when all else fail I take a pause and think of what a wise man once said: don’t take things too seriously, remember that we are talking monkeys flying through space on a piece of rock.**